Monster is a term used to generically refer to all non-sentient and some sentient enemies players engage in combat.

There are essentially two of Non-Player Characters (NPCs) types you can engage in combat:

Monsters can serve as Creature Props that can be used on build sites as part of a player's build. In both situations you will encounter the same monsters. As such, all monsters listed here are the props, but can be encountered in Chaos Caverns as well unless specifically noted otherwise.

See the Creature Prop page for more info on all types of monsters and faction enemies that can be used on a build site.

With the exception of Fiery Mushrooms, which can be found on both the surface and in caves, this page describes only the most common monsters players will battle. Monsters are found deep within the Chaos Caverns of the the world, each can be type has their own personality and kinds of attacks.

Deep within the chaos caverns, you will also encounter Elite Monsters around the Outposts, which are much tougher to beat than the common monsters described here.

Only Fiery Mushrooms are found both on the surface and in Chaos Caverns. All common monsters (including mushrooms) are in caves. As the player approaches a creature, it will start to make a distinct sound which will come from the direction of the NPC (Non-Player Character monster).

Because Landmark has a wide range of areas to fight in, many of which allow the monsters (and you) to hide, the sounds they make can make a huge difference in your success in battle. The sounds to listen to are described below in each section about the monsters.

Where you fight these monsters can effect the tactics you choose. For example, in most cases, the terrain (hills, dips in the ground, etc.) can be used as a tactical advantage. In caves the narrower spaces may make it more difficult to dodge their attacks by using WASD to strafe.

Your weapon of choice and your armor may also play a large role in you tactics. For example, fighting some with a sword another close-up weapon may require more strafing to avoid being hit, while weapons that allow you distance, like a bow or a staff gives greater freedom to duck out of the way. Each monster is described below, along with some basic tips to fight them. 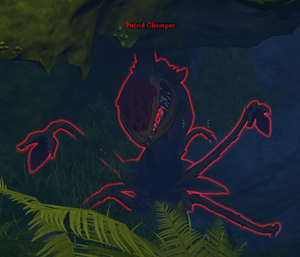 The Chomper is a stationary monster. It's a plant with a large head, sharp teeth, and it has two "arms" that also smaller versions of the mouth seen on the head. When it is ready to attack it purses its lips and its head will enlarge before it release a noxious stream of vomit.

After this first attack, it rear its head up and it will chomp at you if you are near enough or open its head upward and unleash a slightly less toxic spew around its body. It can rotate 360 degrees to continue its attacks.

Though it is stationary, its attacks are extremely deadly because within a two to three hits, it can disable your armor and once your defense is low it only takes one more hit to kill you.

The Chomper can be extremely dangerous in caves, because they often blend with the curves of cave walls. Listen carefully. Before it attacks it has a low growl sound that may help you dodge it.

The slaug is similar to a goblin. It has white eyes, sharp teeth, and extremely large claws on its crooked hands. It stands hunched much of the time, but will occasionally stand like an ape with its hands on the ground in front of it.

These monsters like to hide in crevices in caves and will sneak out to attack. The are often found in the deep tunnel drop offs, so navigate these areas carefully or you can easily grapple right into one.

They attack by swinging their arms and gnashing their teeth. Most of the time, their attacks have a powerful knock-back, which makes them highly dangerous near cave tunnels with drop-offs or if they are within proximity of other monsters; the worst monster they can knock you within range of is the Chomper, because its attacks can be hard to dodge if you're slowed from the Slaug's knock back.

When you are in a cave listen carefully for the sounds these monsters make and look for a spot to either grapple out of their reach. The greatest threat this monster poses is typically the element of surprise. The Slaug makes heavy breathing and grunting noises that will tip you off to its proximity.

The Abomination is a slithering, slimy creature until it rears up and reveals the skull-head within. It will slither toward you and being spewing noxious gas as it approaches. As it nears, it will stop and begin spitting poisonous lumps of goo at you.

It alternates between a single projectile and a triple projectile attack that spreads out as it exits the abomination's mouth. If you remain very near it as it attacks it will also twist its body before it lashes you with a spiny tongue.

Because it is a slime-style monster it can squeeze into small areas in caves easily, so listen carefully for a wet and slithering sound to alert you to its presence.

When you begin attacking this monster it may start to retreat. If so, the greatest threat it can pose will drawing you too near other enemies. 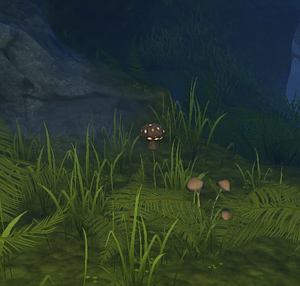 The fiery fungus, often referred to as a "boom shroom" by players, is a very small mushroom with glowing spots that remains stationary. If you walk too near to it, it will inflate and explode in a ball of fire.

The greatest threat this poses is surprise if you do not see or hear it before you run on top of it. In caves it is frequently found in the crevices of drop-off tunnels, so traverse these areas carefully.

If you are careful though, you can run past it quickly and set if off. After it explodes run back to where it was, as it often leaves behind rock or dirt that can be useful for building on a claim. On rarer occasions, it will even drop valuable "loot" like other monsters.

This mushroom has a muted sound that will alert you to its presence. It sounds a bit like an overfilled balloon that is about to burst. If you are standing near one that is enlarging to burst, this sound will go up in volume and pitch.

This Monster was retired prior to the 2016 launch but the info here if being retained in case they return in some form.

The White wisp is a floating ball of light. While it will move fluidly when left alone, it will begin moving slightly erratically when it is attacked. It's attack is simple: it throws balls of light at you.

This monster is the easiest to defeat as long as you can maintain a fairly steady target as it moves when engaged.

These monsters are found around deep, Chaos Caverns outposts. In some cases, they may be found in close proximity, which is the one time they can present a fair challenge, because it can be difficult to dodge more than one ball of light thrown from multiple wisps.

Because they are balls of light, they are generally easy to see even from a distance. The pose the greatest threat when they are just over a hillside or behind a tree, as they will launch and attack faster than Chompers, Abominations, and Slaugs.

Listen carefully for a a jingle that sounds rather like high-pitched bells to alert you to their proximity.

The above videos were contributed by wiki the following wiki editor: RavenSaint (talk) 17:59, December 22, 2014 (UTC)RavenSaint (Serenity-Hilltop)

Retrieved from "https://landmark.fandom.com/wiki/Monsters_(PvE)?oldid=34854"
Community content is available under CC-BY-NC unless otherwise noted.